time to sparkle for Katie O’ !

I don't know how to begin this blog... My job at times can be unpredictable as each day I get to photograph something or someone different. This was most certainly the case last Thursday as I walked into one of the most nerve racking photo shoots of my life. Why was it nerve racking? Well, I wanted to do my good friend, Katie O' right and capture this thing correctly! No pressure... yeah right.

I’ve known for months that my pal, wedding planner Katie O’Malley was getting a ring from the love of her life, Nate. Nate told me a while back and at the time he also told me he wanted me to be there to capture it all. At the time I was honored and I thought to myself no big deal, I’ll shoot it. Then the time came. On August 13th (9 days before she said yes) I got an email from Nate asking for my cell phone number (which is weird because I had him stored in my phone, I see how it is Nate, haha). Anyway, when I got this email I knew it was about the proposal. The following night I had nightmare number one about me screwing it up, then two nights before the proposal I had nightmare number two. I think I was more nervous about this than Nate! It’s weird because I never get nervous about my job, this time it was different though.

Anyone who knows Nate, knows he’s a “go big or go home” kind of guy. Plus he’s proposing to a freaking wedding planner who hears proposal stories for a living! Now, unless you’ve been living under a rock you’ve probably seen the images I took that went viral on facebook last Thursday. I’m sure a lot of people might have wondered how I captured this or why I was there. Simple plan, Katie O’ Weddings and Events is working on some new projects which will need promo photos for. Knowing the fall rush is around the corner Nate urged Katie to set up a time I could capture these images the following week. Nate also told her he needed a quick headshot for his job and maybe he could sneak in on the shoot. It was that simple and she had no clue. I needed to know how Nate wanted to give her the ring. There was a dress that Katie wanted to wear at Travers this past weekend from Vineyard Vines. Nate bought Katie that dress and thought he’d give her the ring inside the box with the dress. In my head I played this scenario out a bunch of times. You know when women are gifted clothes they typically pull out the clothing and hold it against their body right? I told Nate this would most likely happen and it did, see the images below. Anyway I said maybe you can give her the dress, in the box and I’ll shoot it. She’ll think that’s the surprise and then you can blow her mind when you pull the ring out of your pocket and say something like “I got you something to go with it” or whatever he wanted to say. That is how it ultimately went down…

I’ve seen a lot of emotion in my career. Joy, excitement, surprise, love, admiration and of course “sparkle” are some adjectives I think of when I watched Nate propose to Katie. It was without a doubt one of the best moments I’ve captured in my 20 years of taking photos. I’ve known Miss Katie O’Malley for easily over a decade and can tell you I’ve never seen her happier in my life. Nate makes her sparkle more and more every day and I know he’ll continue to. Nate, thank you for asking me to capture this. What I witnessed in Katie’s office last Thursday was really special. Congratulations again my friends, keep smiling. 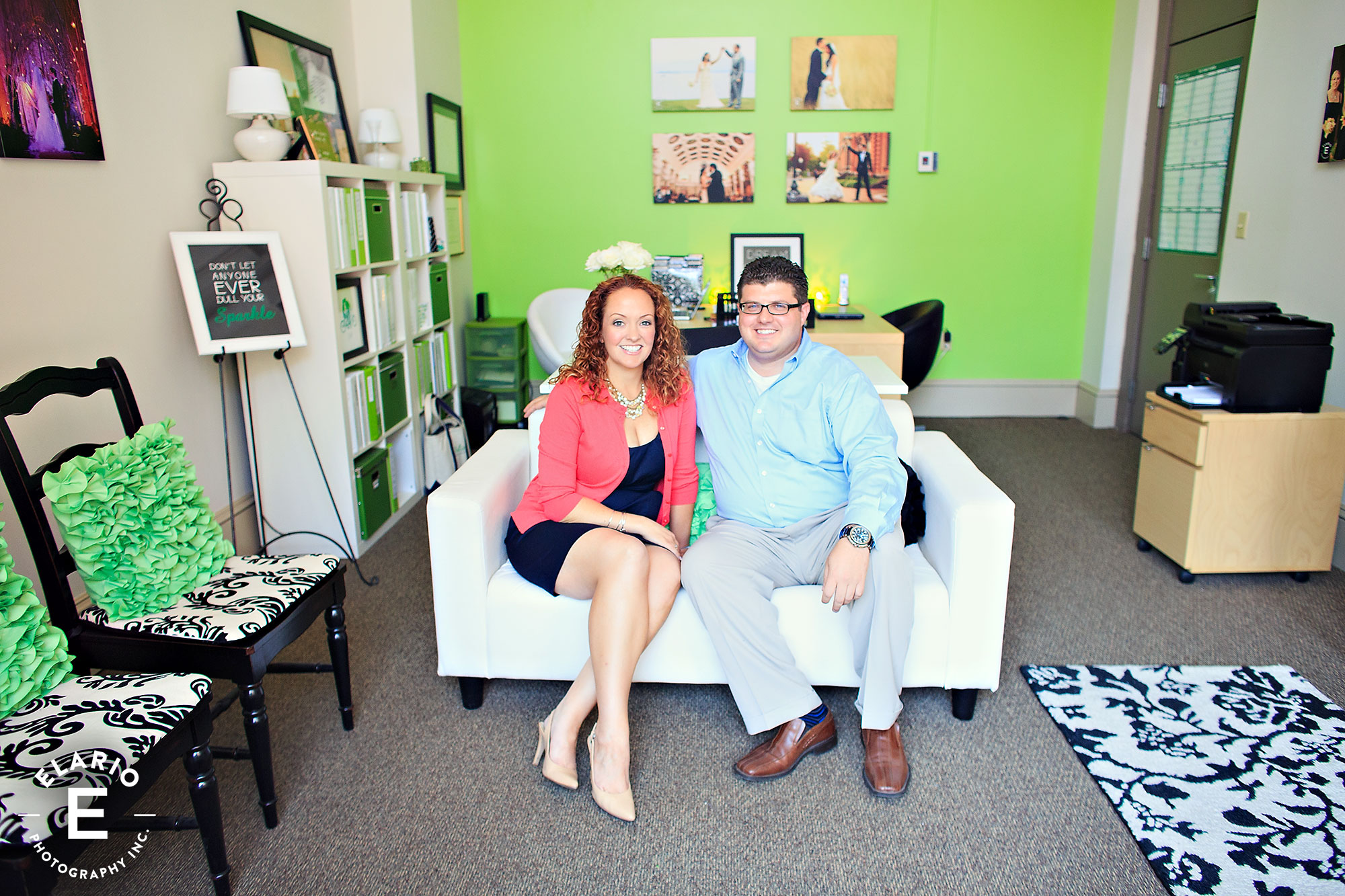 I chose to blog this image because at this point Nate was getting the box from the car. I like that Katie has no clue what was about to happen. Her life is about to change.. 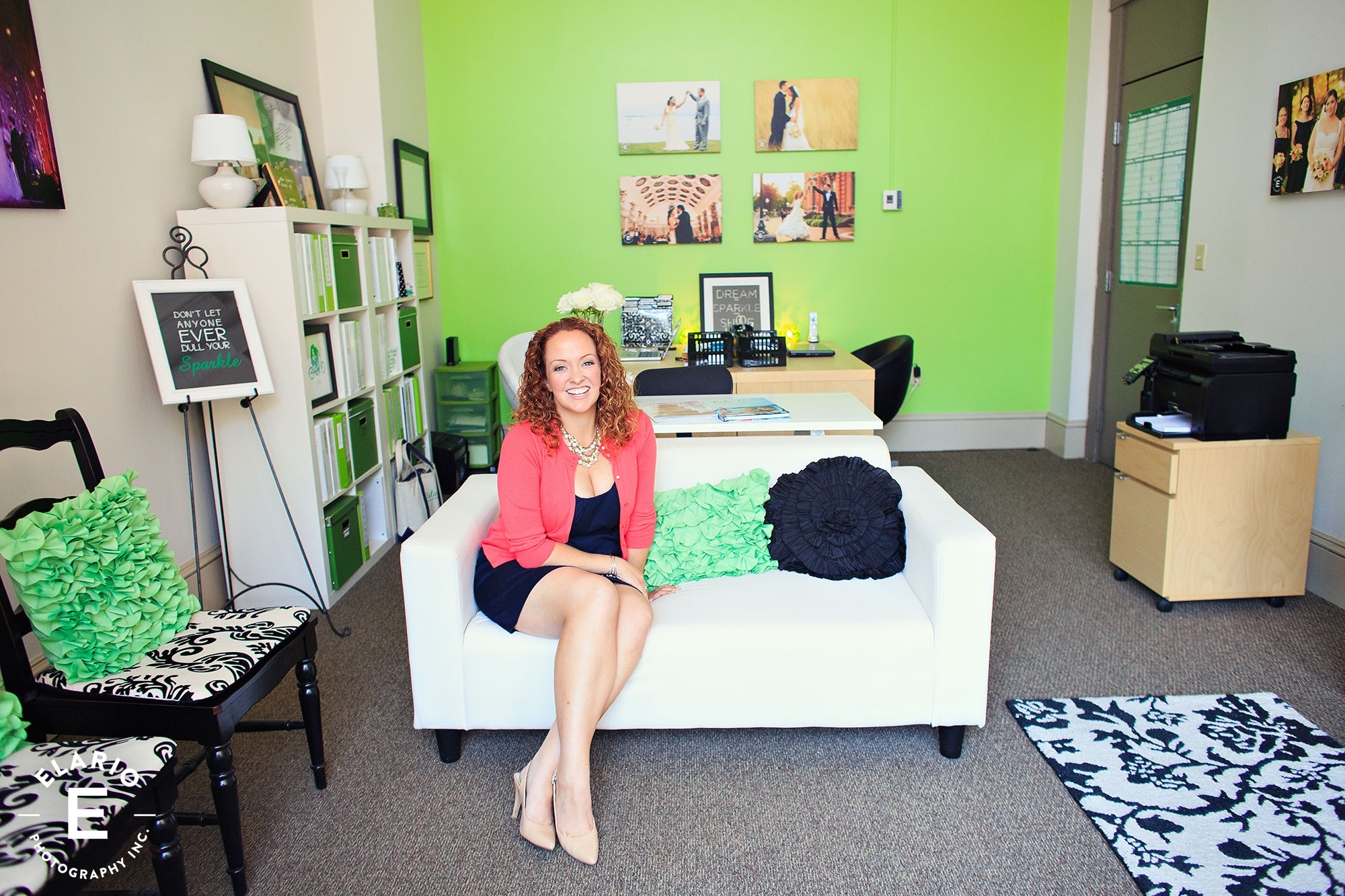 The decoy gift.. I knew she’d hold the dress up…. 😉 (my hearts now thumping with nerves) 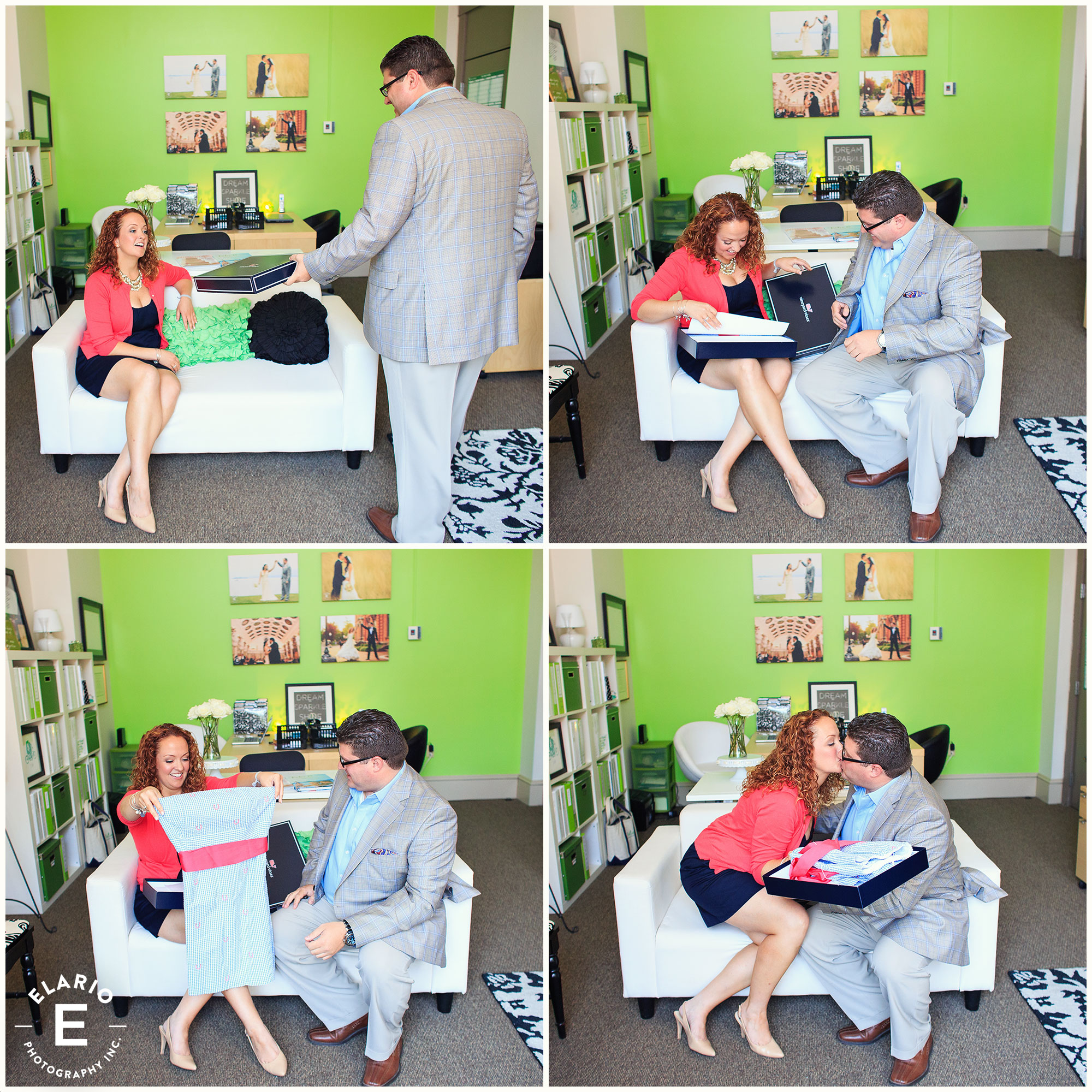 August 22, 2013, 12:56pm, the proposal.. (4 minutes earlier than the shoot was suppose to start, you wedding planners would be happy to know Nate was not only on time but early, haha) 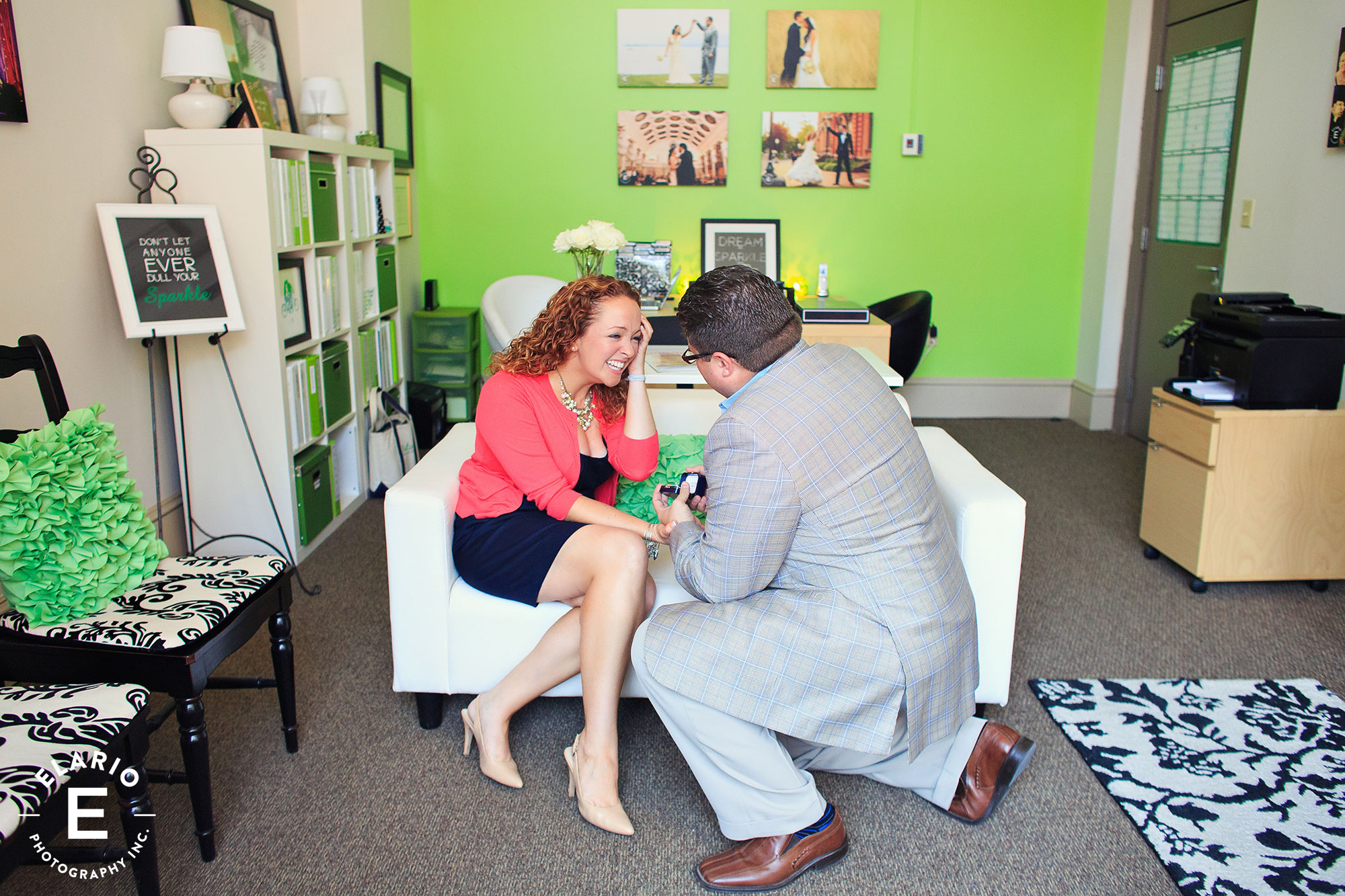 So many emotions.. She of course said yes… and then on the right is floored by the bling! 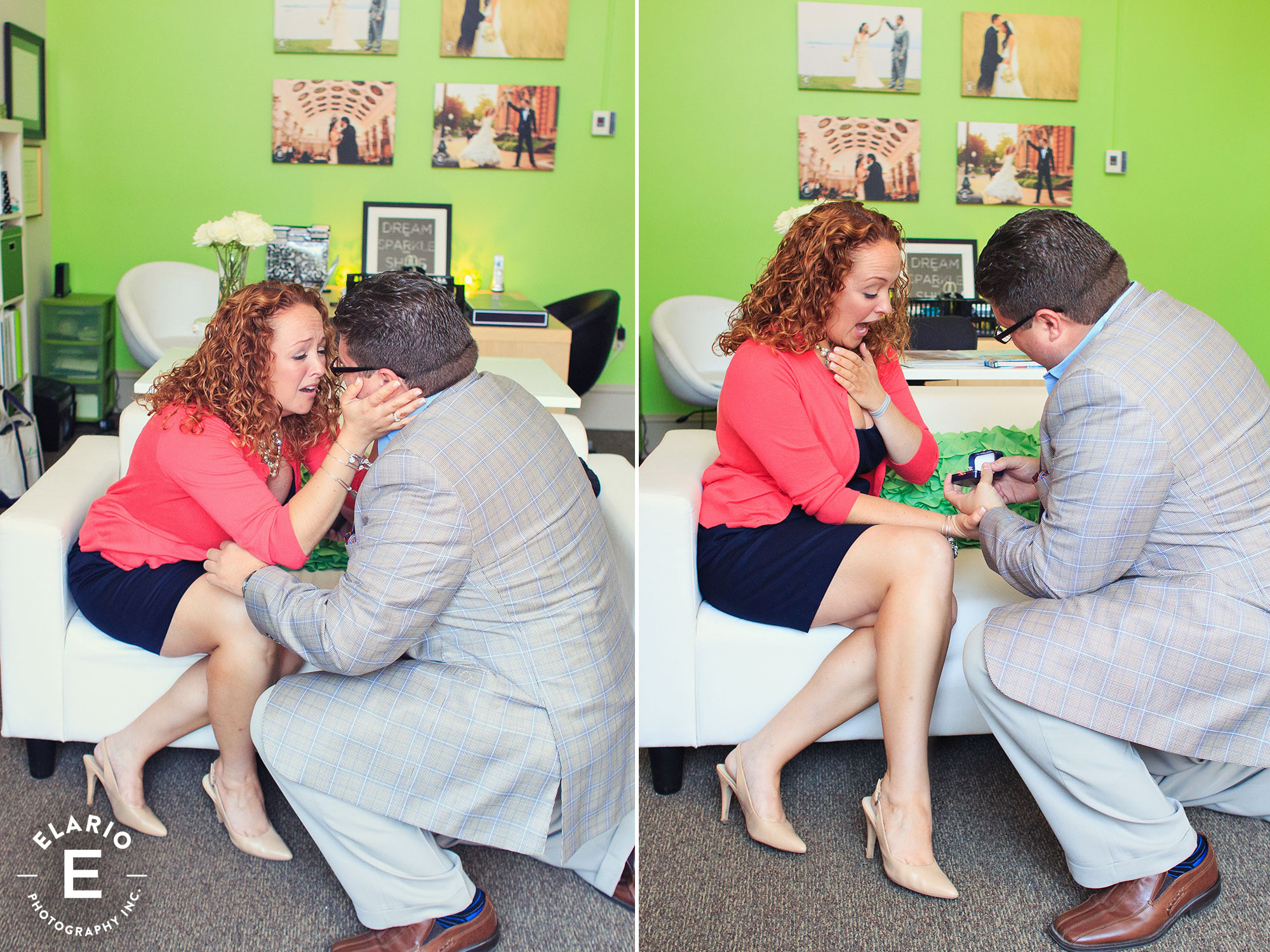 While Nate proposed to Katie she was so attentive to what he was saying and soaking it up.. I swear a plane could have landed on 1st street in Troy and neither of them would have heard it… then in the image on the right, she realized I was still there and totally in on it.. I love it!! 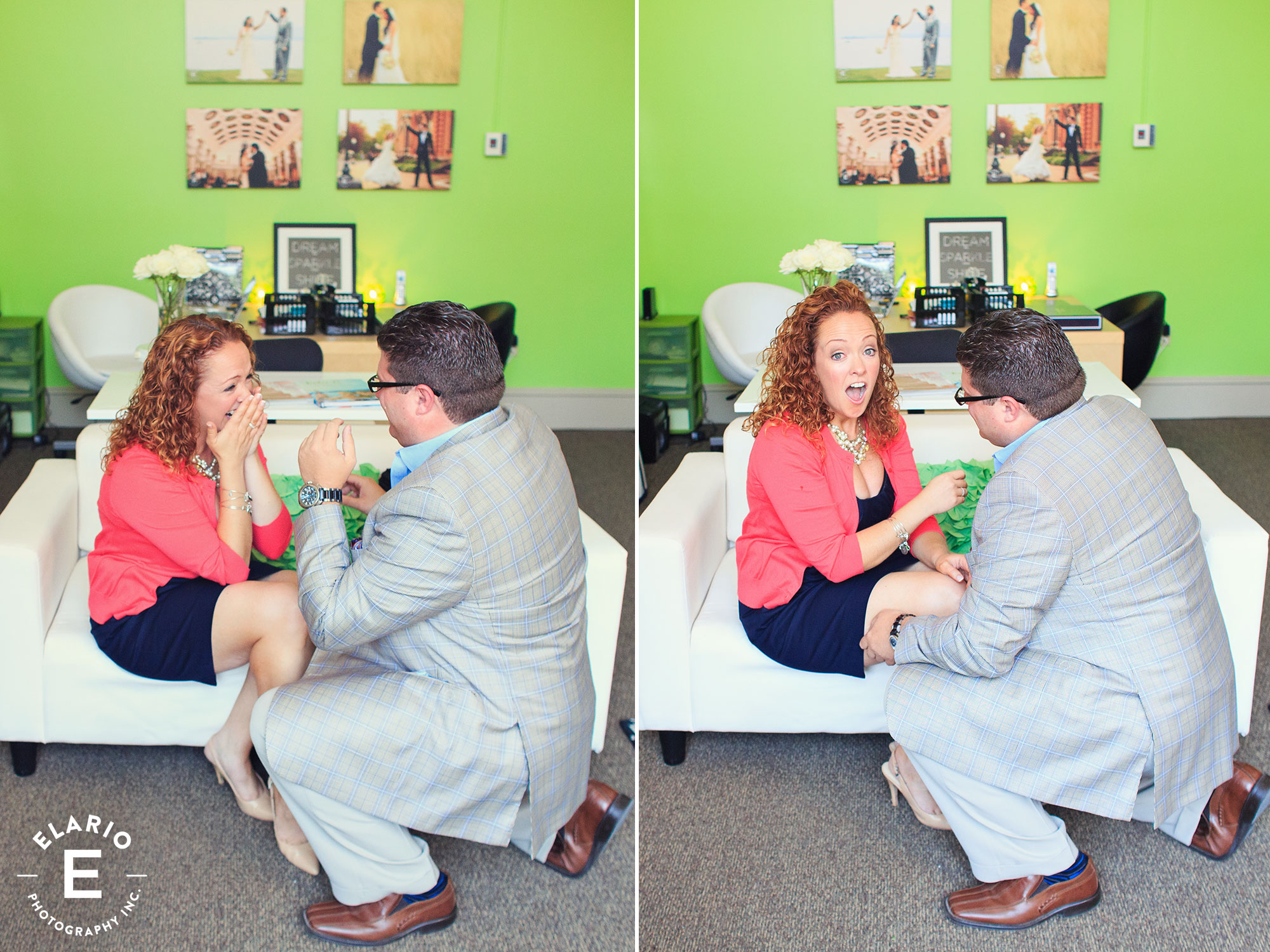 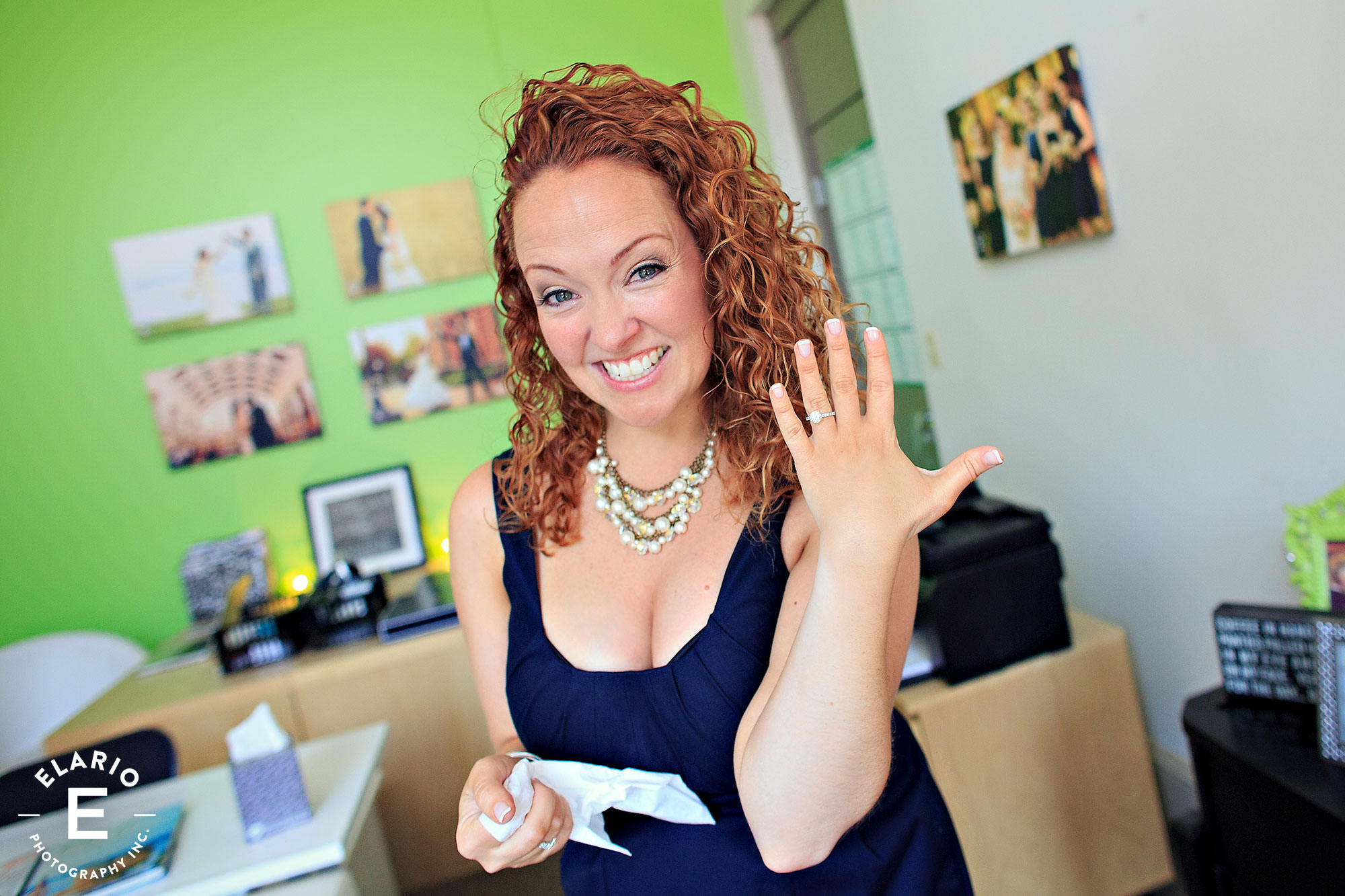 Time to toast! Thanks for including me on this!! 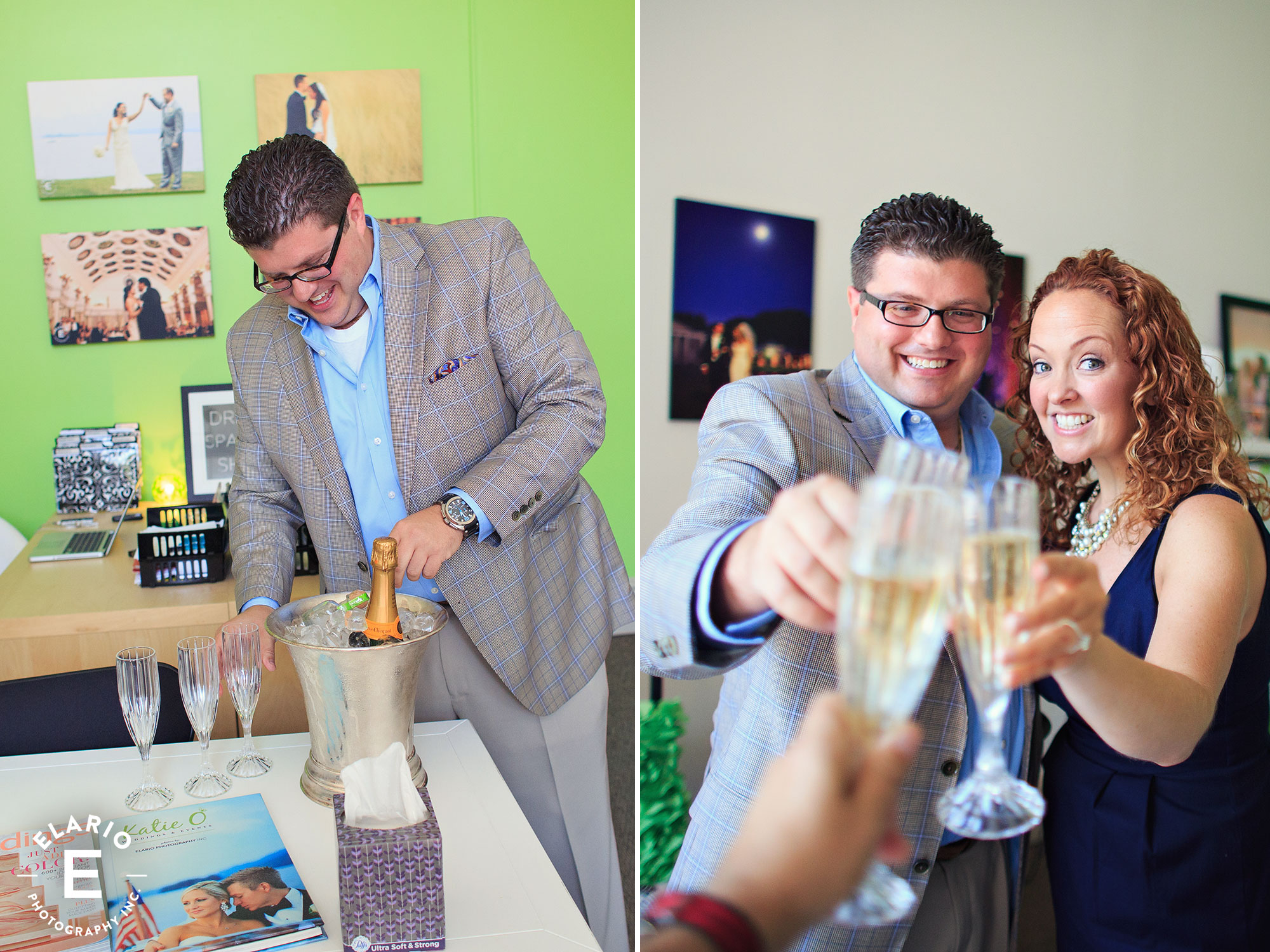 Watch out now, someone has a some swagger in her step.. She wears it well huh? 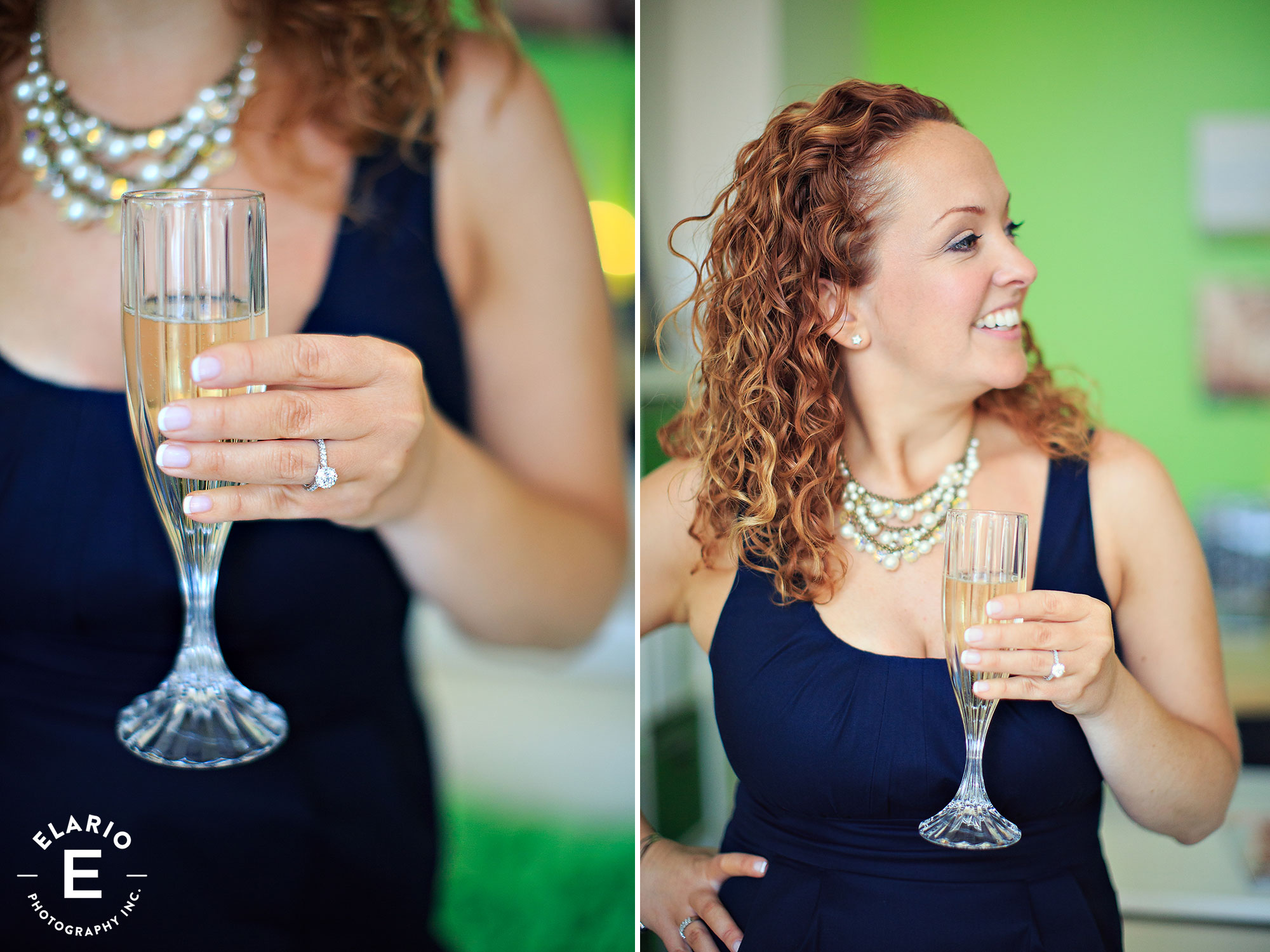 This is the “wait who else knew?” photo. 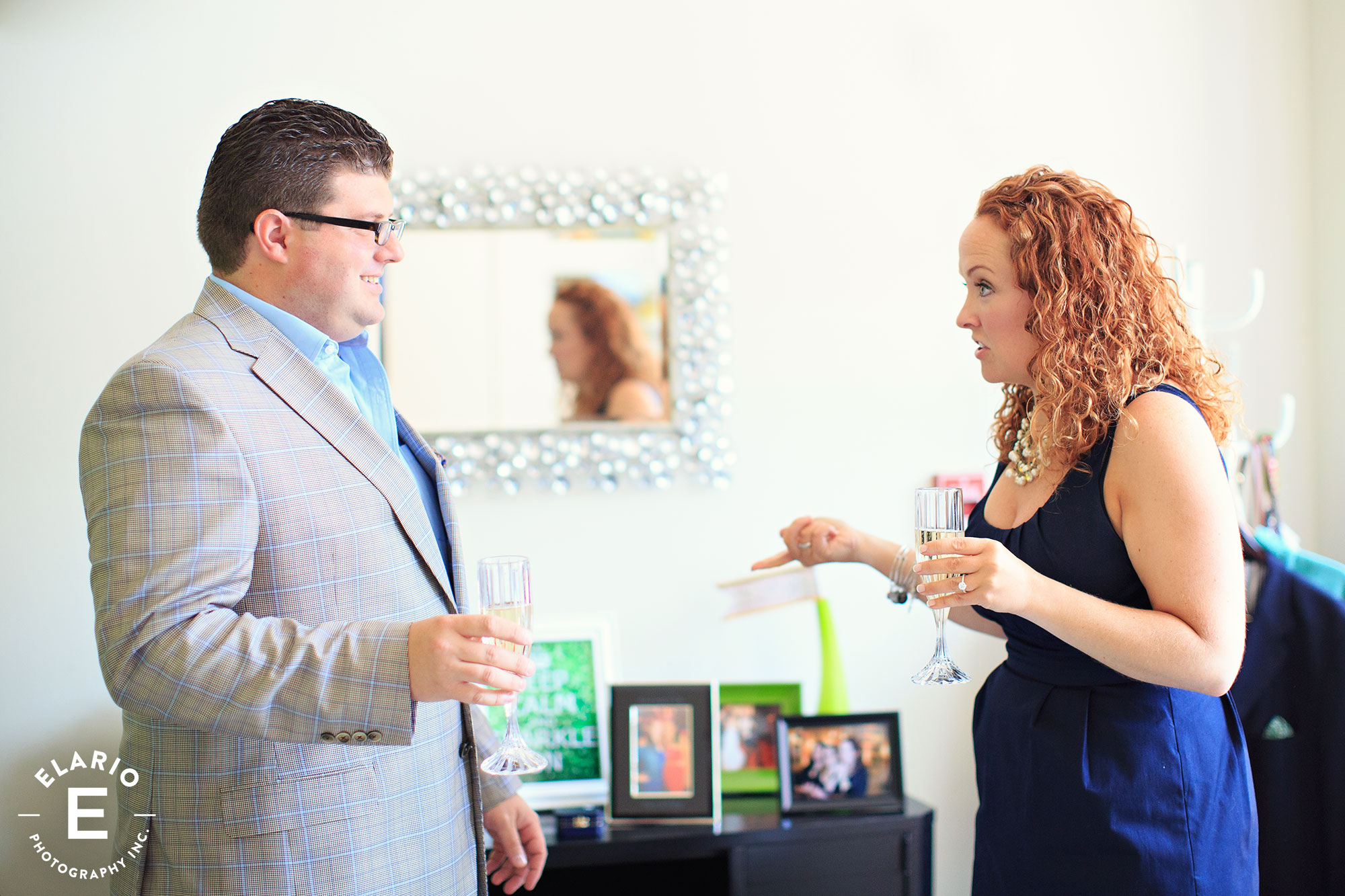 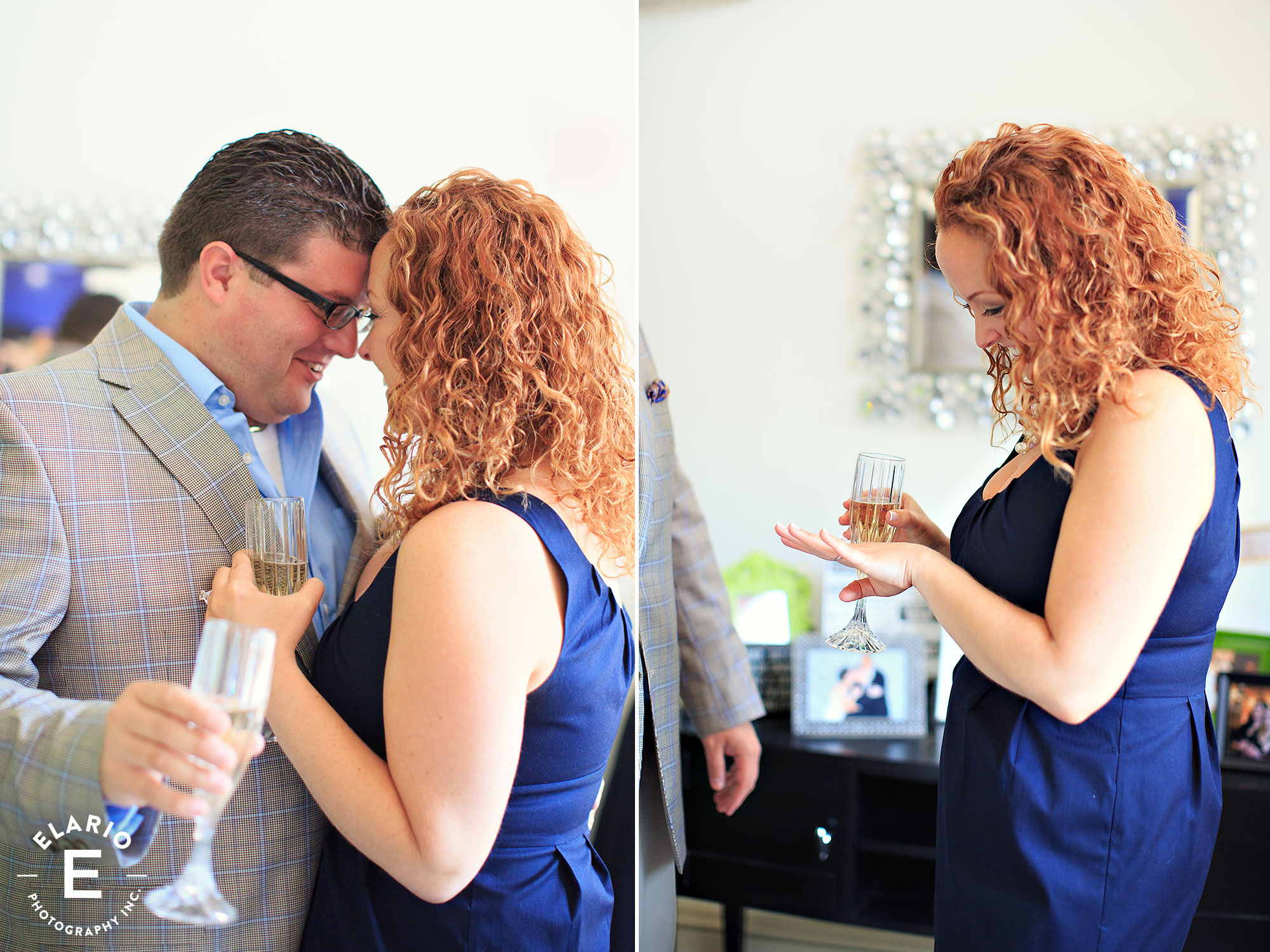 I like to think this is the official engagement photo.. 😉 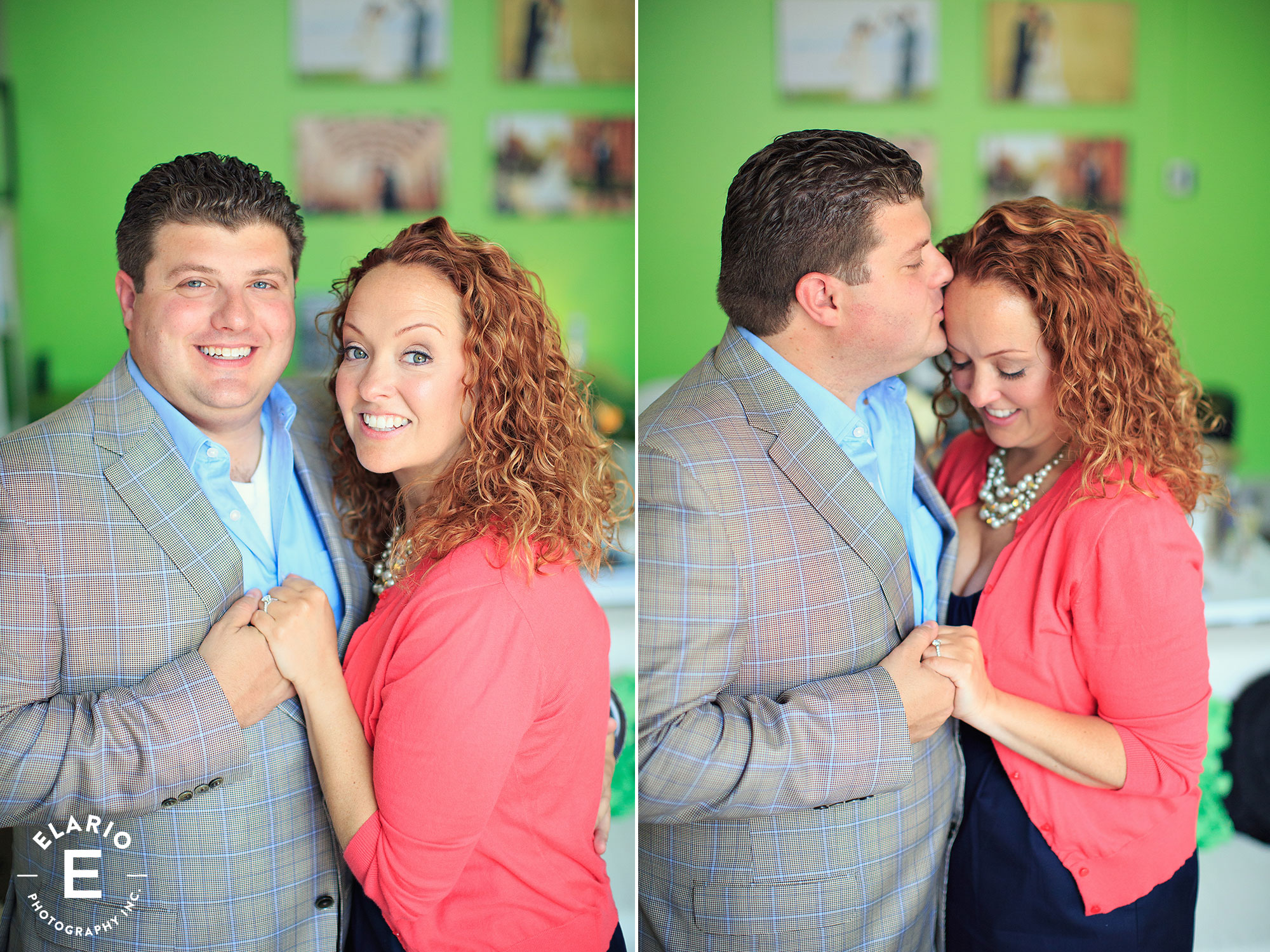 and now of course the turnaround! Congrats again you two! Let’s get to the planning ok??? 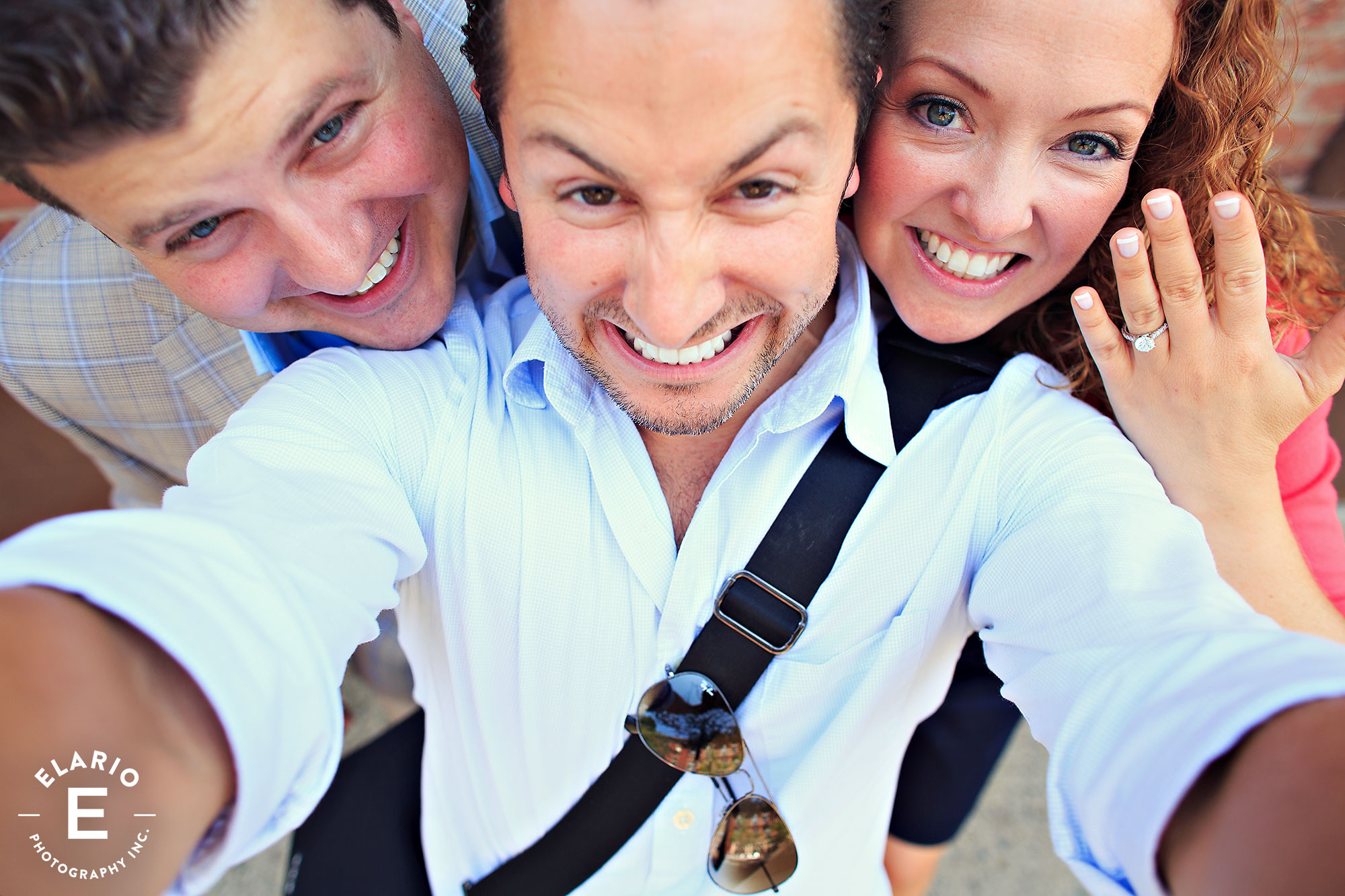 a fun shoot with layna!